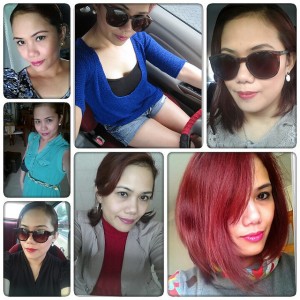 Being a Pinay I am also posting my selfies after Time Magazine currently named Makati and Pasig City, Philippines as the selfie capital of the world. A selfie is a type of self-portrait photograph, typically taken with a hand-held digital camera or camera phone. Selfies are often associated with social networking. They are often casual, are typically taken either with a camera held at arm’s length or in a mirror, and typically include either only the photographer or the photographer and as many people as can be in focus. (Wikipedia)

It no longer surprising.. Filipinos are obsessed with social media. As far as I remember, Philippines was named as the texting capital and now selfie capital. I must admit, I am a social media addict as well, name it i have it.. Facebook, Twitter, Instagram, Myspace, Linkedin, etc.etc.. We love to show to the world how happy people we are despite all the problems and trials our country is currently facing. On the other hand, it could also mean how narcissistic and self centered we can be. Posting every new dress, new accessory, new car, new make-up, new watch…just desperate for attention. Part narcissism, part vanity, part communication, part experiment and most of all fun. It’s like showing to the world your real face emoticons.

Selfie is so phenomenal that it was named as Oxford Dictinary’s word of the year, a phone application (SelfieIM) http://www.selfie.im , a charity organization (The Selfie Police) http://selfiepolice.org and lots of other useful stuff.